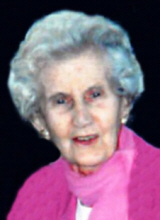 Fay K. (Mullen) Shimeld, age 99, of Hamden, passed away on October 29, 2017. Fay was born in Norfolk, Virginia on August 11, 1918, the daughter of the late Byrd & Mattie (Allard) Mullen. Fay was the widow of John W. 'Jack' Shimeld, Jr. She is survived by her daughters, Susan Iannucci of Hamden and Shelley Wilson of Summerville, SC; her son, Richard Fowler & his wife Cindy of Virginia, 5 grandchildren, and 7 great-grandchildren. She was predeceased by her brother, Dr. E. Eugene Mullen, and son in-law Larry Wilson. Fay was a former payroll clerk at the former Winchester Repeating Arms Company and was employed at the former Sears Store in Hamden. She was a member of the Paradise Country Club and Christ Church in New Haven. Her family would like to thank Connecticut Hospice for her care in her time of need, and also a special thanks to her longtime caregiver Brenda Jones. Friends may visit with her family at BEECHER & BENNETT FUNERAL HOME, 2300 Whitney Ave, Hamden on Wednesday, Nov. 1, from 9:30 AM to 10:00 AM and may attend her Funeral Service that will begin at 10:00 AM. Interment will follow in Hamden Plains Cemetery. Contributions in Fay's memory may be made to Christ Church, 84 Broadway, New Haven, CT 06511.