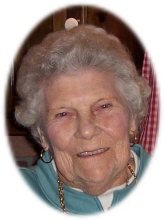 Florence A. Curran, 90, wife of the late Frank D. Curran of Hamden passed away peacefully August 5, 2007 after a brief illness. She was born in New Haven April 27, 1917, daughter of the late Leonard Hudson and Agnes Austin-Hudson. She was a supervisor at Olin Winchester for many years before her retirement and later was very active in the Olin Retirees Club. She attended St. Rita Church and was an avid Red Sox fan. Mrs. Curran is survived by several nieces, nephews, close neighbors, and "Missy" her faithful pet. She was predeceased by her first husband, Thomas Lavenduski who died in action during WW II, a sister Mattie Austin Battalene, and two brothers Richard and Robert Austin. Funeral from BEECHER & BENNETT, 2300 WHITNEY AVE., HAMDEN Thursday, Aug. 9 at 9:00 am. Mass of Christian Burial will be Celebrated in St. Rita Church, Whitney Ave., Hamden at 9:30. Friends may call Wednesday from 4-8 pm. Interment in All Saints Cemetery. Contributions in her memory may be sent to CT Hospice, 100 Double Beach Rd., Branford, CT 06405.