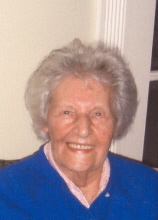 Jones, Florence E. Cerrone Florence Elena Cerrone Jones, of 33 Woodruff St, formerly of Pond Rd, Hamden, passed away March 30, 2008. Florence was the widow of Nathan B. Jones; mother of Mrs. Virginia (Peter) Richardson of Hamden and Alese Jones of Palm Beach, FL; grandmother of Peter Brinstone Richardson of Show Low, AZ and Michael Starnes Richardson of Hamden; sister of Esther Cerrone Hare of Hamden and the late Mary Marino, Evelyn Herrmann, Clara Collins, John and Luigi Cerrone. Florence is also survived by several nieces and nephews. Born in New Haven on June 15, 1915 she was a daughter of the late Diomede and Josephina Manzi Cerrone, originally from Acerno, Italy. Florence was a former secretary for the Knights of Columbus in New Haven. She enjoyed her life as a homemaker, wife and mother, she was a former member of the Sweet Adelines and at one time lived in Boise, Idaho. Friends and relatives are invited to attend a Graveside Service on Tuesday, April 1, 2008 at 11 AM in Beaverdale Memorial Park, the Bronze Section, New Haven. Arrangements are in care of BEECHER & BENNETT, 2300 Whitney Ave. Hamden.