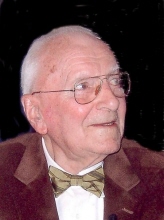 Floyd Tassmer, born October 21st 1910 in Cheshire, CT, the son of the late Paul and Nellie Grogan Tassmer, died January 24, 2010 at the age of 99 at Miller Memorial Community. Floyd raised his family in Hamden and Meriden and owned a summer residence on Hidden Lake in Higganum. He was a hardworking man of diverse talents and made use of them during his longevity. From being the drummer in the musical group Nights of Melody as a young man to being an employee of the Meriden Police Department in his retirement. Floyd was a lead foreman for Winchester Firearms in New Haven and retired from there in the early 1970's. He drove a school bus for Xavier High School for four years before being hired by Meriden Police Department as a crossing guard for Roger Sherman School. A position he proudly held for 23 years, greeting every pedestrian and passerby with a smile and a wave. After retiring from that position he became an active member at the Meriden Senior Center, where he enjoyed singing with their community chorus and helping out at the front desk until illness sent him to Miller Memorial Community in April 2009. There he was treated with the care and respect from a professional loving staff. But of all the remarkable things he achieved and witnessed in his long life, the most notable was his choice for a bride, Gladys. He would often say that she was the very best thing that ever happened to him. Floyd is survived by his son Stuart Tassmer and his wife Jeannette; his daughter Barbara Moncevicius and her husband Ray. His grandchildren Timothy Tassmer and his wife Alexia, Toby Tassmer and Lucas and Jenna Moncevicius. His Great Grandchildren Natasha, Veronica and Karly Tassmer, his Great Great Grandson Kelso Tassmer and his cousin Elaine Neuman of Meriden. His extended, chosen family are too numerous to mention. To all of you, thank you for your love and support. He was pre-deceased by his wife, Gladys Neuman Tassmer and Brother Paul Tassmer. His funeral will leave from BEECHER & BENNETT - FLATOW FUNERAL HOME, 48 Cook Ave. Meriden Thursday Jan. 28, 2010 at 9:30 AM, followed by a Mass at 10:00 AM in St. Rose Church, 35 Center St. Burial will take place in St. Mary's Cemetery, Hamden. Friends may also visit with his family at the funeral home on Wednesday from 6:00 to 9:00 PM. In lieu of flowers please make donations to Franciscan Home Care and Hospice Care, 267 Finch Ave. Meriden, CT 06451.