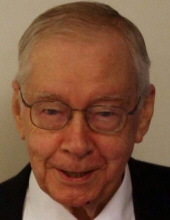 Frank Emley passed into glory on April 16, 2020 after 97 years of richly experiencing the gift of life. He was born at home in Hammonton, NJ on December 23, 1922 into a jolly Methodist family with five siblings. He delivered papers and picked blueberries for pocket change and got around town on a bike. The day after Pearl Harbor he enlisted in the Navy and served his country honorably, primarily in the Pacific handling radio communications on a sub chaser. Immediately post war he married his sweetheart Alice Long, a nurse. With her support and the assistance of GI Bill benefits he earned an engineering degree from Rensselaer Polytechnic Institute. Frank relished his employment with Westinghouse and later Pfizer in the developing field of powder metallurgy. He published papers with a particular emphasis on nickel and became manager of the Pfizer processing plant in Wallingford, CT. Eventually he set up his own metals consulting firm, traveling internationally to assist companies with metal casting and formulation problems. Frank served as an elder of the Orthodox Presbyterian Church for a half century at Westminster OPC in Hamden, CT and previously with congregations in Harmony, NJ and Pittsburgh, PA. He headed a Christian school board in Pittsburgh and was active in prison ministries. He was a lifelong opponent of racial discrimination. Frank and Alice were masters of hospitality and served countless Sunday dinners to friends. They faithfully visited dear relatives across the country and savored summer seaside vacations with the girls and Grandmom Emley. Their marriage of 54 years reverberated with music and travel. Frank outlived Alice by 20 years, filling his time with deep friendships, UConn women's basketball, bridge, crossword puzzles, his family and faith. Frank was also predeceased by his parents, Roy and Hannah Emley, and his siblings, Edward Emley, Mildred Hartman, Betty Clark and Roy Emley. He is survived by his sister Jean McLeish of Indianapolis, IN, daughters Betty Anderson (Steven) of Auburn, ME, Lucinda Shields (David) of Columbia, SC, and Margaret Szulc (John) of the Isle of Bute, Scotland, his grandson Marcus Shields of NY, NY and several nieces and nephews he held in high regard. A worship service of memorial and celebration will be announced at a later date. Beecher & Bennett Funeral Home, Hamden is assisting with the arrangements. In lieu of flowers the family suggests contributions to Hagaman Memorial Library, 227 Main St., East Haven, CT 06512, a gracious place where he was always warmly welcomed by name and made to feel at home.