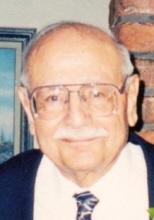 Frank (Francis) Tirendi, age 88, of Hamden, passed away on September 8, 2012. Frank was predeceased by his wife Mona Bottomley Tirendi. He was born on October 10, 1923 in Lawrence, Massachusetts, a son of the late Salvatore & Grace Manno Tirendi. Frank is survived by his daughter Monica Tirendi of North Haven. He was a graduate of Yale University and later attended and graduated from the University of New Haven. A resident of Hamden most of his life, Frank was employed at REM Surface Finishing in Southington. There will be no calling hours and Frank's interment will be Private per his request. His arrangements were in care of BEECHER & BENNETT FUNERAL HOME, 2300 Whitney Ave, Hamden.