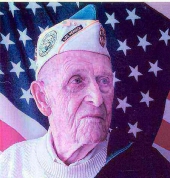 In New Haven, September 7, 2006, Frank L. Stebbins, Jr., 87, of Grand St., West Haven. Husband of 63 years of Lois Swigert Stebbins. Born at home, 334 Elm St., West Haven on December 13, 1918, he was son of the late Frank and Lena Dickerman Stebbins, Sr. He attended Washington School and Stiles School. He graduated from West Haven High School in 1936. Frank became very active in the order of Demolay. He was Master Councilor of the West Haven Chapter. He was elected State Master Councilor of the State of Connecticut in 1940. After a short time working at Winchester's, Frank gained employment with The Western Electric Co. in West Haven, retiring after 43 years in 1981. In view of the Worldwide turmoil, Frank enlisted in the U.S. Naval Reserve in Oct., 1940 and was called to active duty in April, 1941 for the duration (of what) not to exceed 10 years. He became a Signalman aboard the U.S.S. Solace, a hospital ship, and for their actions during the attack on Pearl Harbor, the Solace received a Naval Unit Commendation. He later transferred to the U.S.S. Neches, a fleet oil tanker. He sailed with Admiral Halsey and Admiral Spruance. Frank was aboard the third ship into Tokyo Harbor for the surrender ceremonies. Between Pearl Harbor and Tokyo, he received nine Battle Stars, the most memorable were Iwo Jima and Okinawa, where he saw the Stars and Stripes go up. On return from the U.S. Naval Service, Frank returned to work at The Western Electric Co., built a new home and had two children, Robert (Judy) Stebbins, of Branford and Susan (Brian) Morrison of Greensboro, NC. Also survived by a granddaughter, Kaitlyn Morrison and a grandson, Kyle Morrison, both of Greensboro, NC. He was predeceased by a grandson, Cameron Stebbins. He became active in the formative years of West Haven Little League and West Haven Biddy Basketball. Frank was appointed Asst. Registrar of Voters for the Ninth District, and held the post for 21 years. He was an active member of the Annawon Lodge A.F. & A.M., became Worshipful Master in 1960, and had 64 years membership. He was also a Member of the Sons of American Revolution. Frank was State Chairman of Connecticut Nutmeg Chapter of Pearl Harbor Survivors Association, Inc. He was responsible for naming the "Pearl Harbor Memorial Bridge" in hope that it would remind people that "Pearl Harbor" happened, and could happen again. GOD BLESS AMERICA. A Memorial Service will be held Monday, Sept. 11 at 2 PM at the Overseas Ministries Study Center, 490 Prospect St., New Haven. Rev. Kimball Cartwright will officiate. Services under the direction of BEECHER & BENNETT-TAYLOR, 410 Campbell Ave., West Haven.