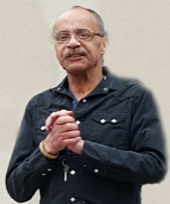 Frank Miguel Stanley, Sr., 70, of New Haven passed away July 26, 2017 in St. Mary's Hospital after a brief illness. He was born in New Haven April 11, 1947, a son of the late Howard E. Stanley, Sr. and Anna Santos Stanley and had resided in New Haven all of his life. He served in the US Army during the Vietnam War and was employed as a plumber for many years prior to his retirement. Frank is survived by his children, Shawn (Corey) Bellamy, Frank (Kelly) Stanley, Jr. and Nina Stanley, his grandchildren, Rodney Jr. and Rochelle Kilpatrick, William Cawley, Tramell and Javyir Stanley, Kaliyah and Kaiden Medeiros; his great-grandchildren, Brinley Cawley and Gabriel Kilpatrick, and his former wife Patricia Stanley. He is also survived by a sister, Priscilla Andrade, and brothers, Howard (Melody) Stanley, Jr. his twin brother, Jesse Stanley, and James (Aldina) Stanley. He was predeceased by a sister, Antoinette Wyncoop. He also leaves a host of nieces, nephews, cousins, family and friends. Relatives and friends are invited to visit with his family Monday, July 31, at St. Martin de Porres Church, 136 Dixwell Ave., New Haven from 9-10 am followed by a Mass of Christian Burial at 10 am. Interment with Military Honors will follow in St. Lawrence Cemetery. Arrangements in care of BEECHER & BENNETT FUNERAL HOME, 410 Campbell Ave., West Haven.