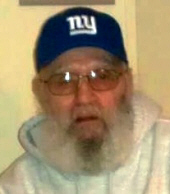 Frank Marshall Gray, 62, of Claudia Dr., West Haven passed away unexpectedly Oct. 19, 2012. He was born in Dover-Foxcroft, ME on Feb. 15, 1950, son of the late Lewis L. and Thelma Perkins Gray, and had resided in Nashua, NH, Manchester, NH, New Haven and Bridgeport before moving to West Haven in 2008. He served in the US Army during the Vietnam War and later was employed as a welder/fabricator for many years. He is survived by his daughter and her husband Tiffany & Mark Budeit, Jr. of No. Branford, his three grandchildren, Thomas, Aijalyn, and Alana Budeit, his siblings, Brian Gray, Harley 'Buster' Cuthbertson, Sr. and Susan Quint. He was predeceased by his sisters, Betty Ventura, Velma 'Peanut' Lamb and his brother Lewis Gray, Jr. Frank is also survived by his close family friends, Eric Durst, Kayla Durst, Angela Durst Martin, Adam Kazlouskas, and many cousins, nieces and nephews. Friends may visit with his family Thursday, Oct 25, from 4-7 p.m. at BEECHER & BENNETT, 2300 WHITNEY AVE., HAMDEN. Army Military Honors will be presented at the funeral home Friday morning at 10 a.m.