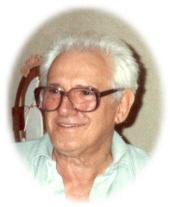 Frank N. Piscitelli, 90, of W. Ridgeland Rd., Wallingford, formerly of East Haven, husband of the late Marie V. D'Angelo died on July 22, 2006. He was the son of the late Nicola & Maria DellaVecchio Piscitelli. He is survived by sons Alan (Linda) Piscitelli of Hamden, and David (Kelly) Piscitelli of Wallingford, and daughters Elaine Finelli of East Haven and Barbara (Anthony) Mongillo of Orange Park, FL. He was the brother of Albert (Jennie) Piscitelli of East Haven. He leaves 8 grandchildren and several great-grandchildren. He was predeceased by one brother and one great grandchild. He was born in East Haven on September 21, 1915. He had been a machinist at the former Mettler Brothers & the former High Standard. Frank was a member of Wallingford Senior Center. A funeral service will be held at BEECHER & BENNETT, 2300 Whitney Ave., Hamden on Mon., July 31 at 12:30 p.m. Friends may call prior to the service from 11 a.m. to 12:30 p.m. Interment in St. Thomas Cemetery in Southington.