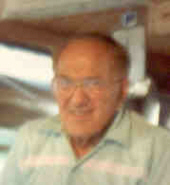 Frank P. Muzio, Sr. 95, loving husband of Anne Catalani Muzio of Hartford Tpke, North Haven, passed away August 5, 2011 after an extended illness. He was born in North Haven Aug. 3, 1916 a son of the late Gaetano and Concetta Triolo Muzio and proudly served in the US Army during WW II. He was a self employed farmer and operated Frank's Fruit & Vegetables for over 45 years, which is now operated by his son as Frankie's Fruit & Vegetables. Frank was also employed by the Town of North Haven in the Water Sewage Treatment Plant for 25 years before retiring in 1988. He was a member of the West Ridge Vol. Fire Dept. and the American Legion Post # 76 of North Haven. In addition to his wife he is survived by his son Frank P. Muzio, Jr. of North Haven, brothers Victor Muzio of NJ, Salvatore 'Sam' Muzio and Thomas Muzio both of North Haven. He was predeceased by brothers Joseph and Gerald Muzio. Funeral from BEECHER & BENNETT, 2300 WHITNEY AVE., HAMDEN, Tuesday morning Aug. 9 at 9:30 a.m. Mass of Christian Burial will be celebrated in St. Barnabas Church at 10 a.m. Interment with Military Honors in New Center Cemetery, North Haven.