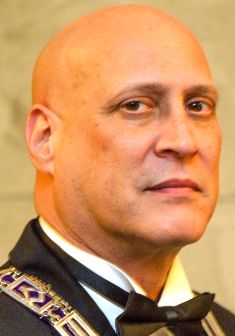 Frank Raymond Mangiero, 59, of Hamden, passed away unexpectedly in his home on March 9, 2021. He was born in Hartford on April 7, 1961 to the late Alphonse and Grace Lombardi Mangiero.
Frank was a longtime active member of the Annawon Lodge #115 of West Haven. Almost unheard of, he was Past Master for two consecutive years, 2016 and 2017. He was Associate Grand Tiler of the Grand Lodge of the State of Connecticut, and in 2018 he was awarded Mason of the Year. Frank was influential as coordinator for the Child Identification Program. From 2009-2015, he was the owner of Big John’s Deli in West Haven, and presently was a supervisor for Encompass Digital Media. Golf, cooking, and riding his motorcycle were some of his favorite pastimes. Frank will be remembered for his huge heart and selflessness. A charitable and kind man, he was always willing to sacrifice his own needs in order to ensure others were taken care of.
Frank leaves his two sons, Evan and Jeffrey Mangiero and his fiancée, April Renee Mercure, all of Hamden.
Friends may visit with his family on Tuesday, March 16th from 9:00 a.m. to 12:00 p.m. at BEECHER & BENNETT, 2300 Whitney Ave., Hamden. His Funeral Service, along with a Masonic Service, will take place at 12:00 p.m. in the funeral home followed by his burial in Evergreen Cemetery. Memorial contributions in Frank’s name may be sent to the Annawon Lodge Memorial Fund, P.O. Box 9, West Haven, CT 06516.

In the event you were unable to attend Frank’s service, a recording can be viewed here: Frank Mangiero Masonic Service.