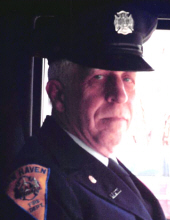 Frank W. Erff, 81, of Hamden, passed away on April 30, 2019 at the St. Raphael's Campus of Yale-New Haven Hospital. He was the beloved husband of nearly 48 years to Marilyn (Clancy) Erff. Frank was born on April 12, 1938, son of the late Joseph and Helen (Hendricks) Erff. He was a retired member of the New Haven Fire Department. During his time as a firefighter, he worked part-time at Stop & Shop, and was a custodian for Blessed Sacrament Church. He was a lifetime member of Engine Co. 1 in West Haven, as well as a member of the New Haven County Fire Emergency Plan. Along with his wife Marilyn, he is survived by his son, Matthew Erff; brother, Philip Erff; sister-in-law, Alida Erff; and brother-in-law, Peter Eyler; as well as several nieces, nephews, and great-nieces and nephews. He was predeceased by his brothers, Joseph Erff, Jr. and his wife Shirley, Robert Erff, and George Erff; and sister, Patricia Eyler. Relatives and friends are invited to visit with Frank's family on Friday, May 3 from 9:30-10:30 a.m. at Beecher & Bennett Funeral Home, 2300 Whitney Ave., Hamden. Mass of Christian Burial will take place at 11:00 a.m. in Blessed Sacrament Church, Hamden. Burial will follow in Centerville Cemetery. Memorial donations in Frank's name can be made to the Alzheimer's Association of CT, 200 Executive Blvd. Suite 4B, Southington, CT 06489.