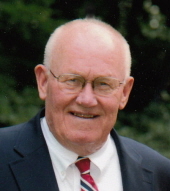 Frank 'Whitie' N. Bensen, age 80, of West Haven, passed away on July 11, 2013 at Conn. Hospice in Branford. Whitie was predeceased by his wife Barbara Cooper Bensen. Born in Hamden on August 22, 1932, he was the son of the late Casper Bensen, Anna Marie Nissen Bensen and Jenny Knudsen Bensen Lovig. He is survived by his daughter, Billie Jean Bensen & her husband Donald Marette of Chevy Chase, MD; his son Kyle F. Bensen & his wife Jennifer of Darien; grandchildren, Terryn Bensen Marette, Griffin Bensen Marette and Tory Bensen; sisters, Ruth Bensen Ekberg of Rockford, IL & Dottie Bensen Rasche of St. Louis, MO and several nieces & nephews. Whitie grew up in Hamden and played hockey for Hamden High School then Clarkson College. His first career was working at Knudsen Dairy in North Haven. He pitched for the Roessler Yellow Tags and officiated at hockey games on the high school and college level. He was on the Board of Directors for New Haven Youth Hockey and a founding member of the Board of Directors for West Haven Youth Hockey. He established Whitie Bensen Athletic Equipment in 1965 after selling hockey equipment out of his car for several years. Whitie was extremely proud of his three grandchildren and followed their academic and athletic careers beginning at the youth organization level, high school and college. He also followed the career of many local athletes and teams over the years. He remained a loyal Hamden and West Haven fan throughout his life. Customers of the store would always know to find Whitie in the back working where he enjoyed refurbishing equipment. Friends may visit with his family on Sunday, July 14th from 4:00 to 8:00 PM at BEECHER & BENNETT - TAYLOR FUNERAL HOME, 410 Campbell Ave, West Haven, CT and may attend his Memorial Service on Monday at 11:00 AM in the Branford Evangelical Free Church, 231 Leetes Island Road, Branford. Interment will be held privately with his family. In lieu of flowers contributions in Whitie's memory may be made to the Whitie Bensen Scholarship Fund, c/o Whitie Bensen Athletic Equipment Inc. P.O. Box 248, West Haven, CT 06516.