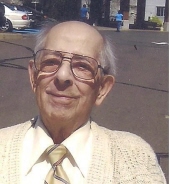 Meriden- Franklin 'Luin' Chase, 96, went to be with his heavenly father on Saturday, January 4, 2014. Luin, as he was best known, passed away peacefully after a short illness at Elim Park Place in Cheshire. He was married for 53 years to his loving wife, Dorothy, who passed away in 2002. Luin was born on May 4th, 1917 to Frank and Arlia Chase and was a lifelong resident of Meriden and had worked for International Silver for over 35 years before retiring. He was best known for his wonderful tenor voice. He started singing at the age of ten and was singing solos at the Mason's Temple by the time he was in his early teens. He sang in the Insilco choir and many other choral, church, and civic choirs throughout his life. He dedicated his voice to the Lord and sang mostly Christian music, accompanied on the piano by his wife Dot. Luin is survived by his daughter; Dorene Biossonneault of East Hampton, two sons; Franklin 'Skip' Chase (Joyce) of Meriden, and Robert Chase of Hartford, and a sister, Ruth Johnson of Meriden. He is also survived by seven grandchildren; Anne (John) Andrews, Laura Jean (Donald) Longley, Joyce (John) LaRouche, Andrew Christopher Chase Brian (Wendy) Biossonneault and Brad Biossonneault, and nine great-grandchildren; John, Daniel and Katherine Andrews, Olivia Longley, Sasha LaRouche, P.J. and Kala Mickens, Jazmin McFarlane and Justin Boissonneault. He was predeceased by a daughter, Arla Brandl, two brothers; Robert W. and Marl H. Chase and two sisters; Arline Leck and Bertha Lindeloff. The family would like to thank the staff at Elim Park Place for the wonderful and loving care that he received while he was a resident. Relatives and friends may call at the BEECHER & BENNETT-FLATOW FUNERAL HOME, 48 Cook Ave., Meriden on Thursday, January 9, 2014 from 4-7 p.m. A Memorial Service at Elim Park Place will be held at a later date. Burial will be held at the convenience of the family. In lieu of flowers donations may be made to Elim Park Place, 140 Cook Hill Rd., Cheshire, CT 06410