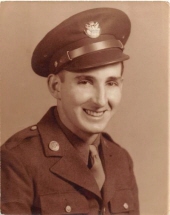 Frederick A. Goodwin, Jr. 94, of Hamden, passed away on January 15, 2015. Born in New Haven on August 12, 1920 to the late Frederick A. Goodwin, Sr. and Elizabeth Greiser Goodwin. Fred was predeceased by his two wives, Carmela Bertier Goodwin and Geraldine Goodwin. He is survived and will be dearly missed by his daughter, Susan Goodwin and her husband Christopher Phillips, of East Lyme; son-in-law, Michael Pace; two grandsons, Michael Pace and Jason Mailhot, and his great-granddaughter. He is predeceased by his daughter, Carol Pace, and his brother, William Goodwin. After growing up in New Haven he moved to Hamden where he has resided since 1967. Fred was a proud U.S. Army Veteran, having served in WWII and was a major participant of the European Theater. He had been employed at United Elastic in West Haven until his retirement and was a member of the American Legion. Dogs were a love of his, especially Shepards, and he greatly enjoyed working with his hands, doing woodwork and making furniture. Funeral Service will be held at BEECHER & BENNETT, 2300 Whitney Ave., Hamden at 10:00 AM on Thursday, January 22nd. Friends are invited to visit with his family at the funeral home prior to the service, from 9:30-10:00 AM followed by interment with Military Honors in Beaverdale Memorial Park. Contributions in Fred's memory can be sent to the Wounded Warrior Project, PO Box 758517, Topeka, KS, 66675 or given online at www.support.woundedwarriorproject.org.