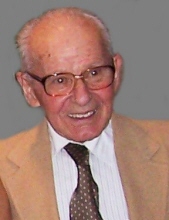 Frederick George Lendroth, Jr., 90, of Hamden, husband of the late Emma Becker Lendroth, passed away peacefully at his home on October 7, 2009. He was born June 13, 1919, in East Haven to the late Frederick Sr. and Helen (Curren) Lendroth. He proudly served his country during WW II, in the US Army as an Artillery Man fighting in the African Theater, stationed on a Pacific Island. He was an active member of the Dunbar United Church of Hamden, also an avid NASCAR and Red Sox fan. Fred is survived by his daughters, Patricia Lendroth of Hamden , Virginia Dias and her husband Victor of Hamden, sons, Wayne Lendroth of Hamden, Mark Lendroth and his wife Martha of North Haven, Jeffrey Lendroth and his wife Kristen of Hamden, and Philip Lendroth and his wife Joann of New Haven. Blessed with 11 grandchildren and 10 great-grandchildren. Funeral from BEECHER & BENNETT, 2300 Whitney Ave., Hamden on Monday, October 12, at 11:30 a.m. followed by a Funeral Service at Dunbar United Church of Christ, 727 Benham St., Hamden, at 12 noon. Friends may visit with his family on Monday morning from 9:30 to 11:30 a.m. Interment with Military Honors at Beaverdale Memorial Park. In lieu of flowers contributions in Fred's memory may be sent to CT Hospice, 100 Double Beach Rd., Branford, CT 06405 or the American Lung Association, 1301 Pennsylvania Ave., NW Suite 800, Washington, DC 20004.