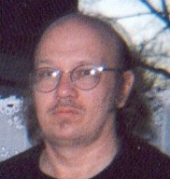 Frederick Graves Davis, beloved son of Liselotte M. Davis, of Hamden, passed away in New Haven on March 24, 2012 after recently being diagnosed with cancer. He was born in Boston on July 14, 1958. Fred was known to many friends in New Haven because of his gregarious nature and his unique bicycle. In recent years he had become really knowledgeable about computers, and from the veritable computer empire in his apartment he also was connected to many people. He loved the city of New Haven which he said he would never have to leave since, as he put it, 'I can call the world to me'. He had made New Haven his home for the last 30 years. He always answered his phone saying, 'Super', because he worked as a superintendent at an apartment complex on the Boulevard. Besides his mother, he leaves two sisters, Susan Davis of Haydenville, MA and Andrea Davis of Kings Valley, OR. Friends are invited to visit with his family at BEECHER & BENNETT, 2300 Whitney Ave., Hamden, on Saturday, March 31st from 10 to 11 a.m. A Celebration of Fred's Life will start at 11:00 a.m. at the funeral home followed by interment in St. Mary's Cemetery. If you have a photo of Fred, please bring it to share with his family.