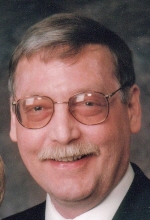 Wallingford- Frederick J. Langner, 61, husband of Barbara Cook Langner, died peacefully at home on Tuesday, October 11, 2011. Born in Torrington, CT on January 14, 1950, he was the son of Janis Langner and the late Frederick C. Langner. Fred grew up in Torrington and graduated from Torrington High School in 1968. He received an associate degree in electrical engineering from Waterbury State Technical College in 1971. He moved to Meriden in 1973 shortly before he and Barbara were married in January 1974. In 1999 they moved to their current home in Wallingford, CT. Fred worked for SNET from 1972 until his retirement from AT&T in 2008. Fred was a member of Center Congregational Church in Meriden. A model train enthusiast, Fred also enjoyed watching movies, listening to music, and doing any chore that allowed his to drive his tractor. But most of all, Fred loved spending time with his family and friends. Fred lived the life he was given with gratitude, quiet courage, and an appreciation for each new day. His hearty laugh, sense of humor, and loving spirit will be missed. In addition to his wife and mother, Fred is survived by one sister and two brothers: Ellen and James Garvin of Tracy, MN, Albert and Melanie Langner of Coventry, CT, Walter Langner and Daniel Green of Hartford, CT; he is also survived by several nieces and nephews: Jennifer Warenda, Daniel Cook, Connor Cook, Beth Garvin, Patrick Garvin, Karl Langner, Erick Langner, Sarah Langner McHugh and one great-niece Brynn Garvin. He leaves behind his sisters-in-law and brothers-in-law: Liza and Bob Warenda of Meriden, CT, Bil Cook of Apex, NC, and Christopher and Judy Cook of Brockport, NY, as well as his mother-in-law Betty Karpinski of Columbus, NC. In addition to his father, Fred was predeceased by his grandparents and his sister-in-law Lisa Langner. A Memorial celebration of Fred's life will be held on Saturday, November 12, 2011 at 1:30pm at Center Congregtional Church, 474 Broad St., Meriden, CT with the Reverand James Olson officiating. There will be no calling hours. In lieu of flowers, the family requests that memorial donations be made to either the Robert H. Wharton Scholarship Fund or the Chapel Renovation Fund, both in care of Center Congregational Church, 474 Broad St., Meriden, CT 06450. The Beecher & Bennett-Flatow Funeral Home, 48 Cook Ave., Meriden is in charge of the arrangements. To send a condolence please see obituary at www.beecherandbennett.com. The family would like to express their heartfelt thanks to Fred's medical providers for their exceptional care throughout the years, as well as to the donor family for their unselfish gift which made it possible for family and friends to share in Fred's life for an additional 19 years.