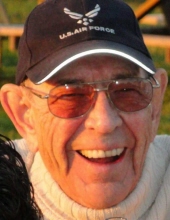 Frederick Joseph Miller, Sr., 92, of Hamden, loving husband of 40 years to the late Marilyn Taylor Miller, passed away on October 6, 2018 at Masonicare in Wallingford. He was born in New Haven on March 13, 1926 to the late John and Lillie Meyer Miller. He is survived by his children Frederick J. Miller, Jr. and Leslie Miller, sister Lillie Lundby, grandchildren Kevin and Kelsey Miller, Taylor Jacques, niece Jan (Edward) Beaudette, and cousins John (Christine), Greg, Paula (Carl), Alley, and Amanda Miller. He was predeceased by his brother John (Jane) Miller, grandson Jordan M. Jacques, and brother-in-law Conroy (Ruth) Taylor. In February 1944, one month before his eighteenth birthday, Fred signed up to join the military, formally enlisting in the Army Air Force that June. Upon completion of basic training in Mississippi, Fred continued training in radio operations/repair in Truax, WI, electronics in Champaign, IL, and radar in Boca Raton, FL. He always recalled tales from his time as a Search & Rescue Team Member in Florida, searching the Everglades for the infamous Flight 19, five USN Avenger bombers that disappeared during a training flight in December 1945. Fred's final assignment was in Kearns, UT, where he remained until he was honorably discharged in 1947. It was the extensive training the military provided him that ultimately attributed to the successful career he had with Pratt & Whitney Aircraft for well over 40 years. He was a founding member of Christ Lutheran Church in Hamden, an active member of the Masonic Day Spring Lodge #30, the Air Force and University Glee Clubs, and Barbershop Quartet. In his free time he enjoyed giving back and helping his fellow veterans through the House of Heroes CT organization, and going to the casino. Whenever asked 'What keeps you so young?' Fred's famous reply was always, 'I look at pretty women!' Friends are invited to a service celebrating Fred's life on Tuesday, October 9 at 7pm in the Beecher & Bennett Funeral Home, Hamden. Visitation will be from 4-7pm. Interment to be held privately at a later date. In lieu of flowers, donations in his name may be made to House of Heroes Connecticut by going to www.HOHCT.org.