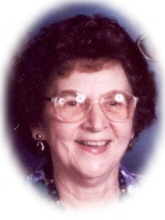 In East Haven, June 7, 2007, Freida Mourtses Poulos of Spring Garden St., Hamden, wife of George H. Poulos, mother of Ann Poulos of Gaithersburg, MD and Andrew H. Poulos of Milford. Born in Springfield, MA on June 6, 1921, she was the daughter of the late Andrew and Sarah Glassanos Mourtses. A graduate of Westfield State College, she was a teacher in the Springfield School system for many years and later at the Ridge Road School in North Haven. An active member of St. Barbara's Greek Church, Freida was a member of the Golden Years Club. Funeral Service will be held at St. Barbara's Greek Orthodox Church of Racebrook Rd., Orange on Monday, June 11, at 11 a.m. with visiting at church from 10 - 11 a.m. Friends may also call at BEECHER & BENNETT, 2300 WHITNEY AVE., HAMDEN on Sunday from 4 - 8 p.m. Memorial contributions may be sent to the Building Fund of St. Barbara's Church, 480 Racebrook Rd., Orange, CT 06477 or to a charity of one's choice.