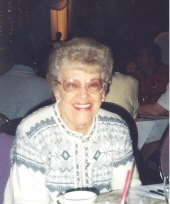 Frieda Craig, 90 of Meriden passed away Tuesday, November 25, 2014, after a brief illness. Frieda was the daughter of the late Edward and Ida Patzlaff and was born September 16, 1924. She was born and raised in Meriden. She worked for many years for Friendly's in North Haven. Frieda was a spit fire to all those that knew her. She was a champion bingo player and knew her slot machines well. She was a pretty lucky lady at both. She is survived by her son, Dennis Craig (Cindy) of Meriden and a daughter Pamela Craig-White (William) also of Meriden. She leaves a brother Kurt Patzlaff of California, a twin sister Ella Tine of Rocky Hill and a younger sister Pat Paul of Wallingford; six grandchildren, Dennis 'Beau' Craig (Donna), Tyler White, Denise Craig, , Zachary Craig, Jonathan Craig and Scott Craig (Theresa). She also has two great-grand children, Andrew Craig and Brian Craig all of Meriden. She also leaves many nieces and nephews. She was predeceased by her husband Dale W. Craig. She was also predeceased by her two brothers, Walter Patzlaff of Meriden and Edward Patzlaff of Florida. Family and friends are invited to attend a prayer service Friday, November 28, at Beecher & Bennett-Flatow Funeral Home 48 Cook Ave. in Meriden at 1:00 p.m. Burial will follow in Gethsemane Cemetery. The family would like to thank the Franciscan Home Care and Hospice Care for their wonderful service they provided during her illness. A special thank you to Sister Catherine Mary, Gini, Annie, Agnas and the staff at Masonic. Gifts in her memory may be sent to Franciscan's Home Care and Hospice Care 267 Finch Ave., Meriden, CT. 06451.