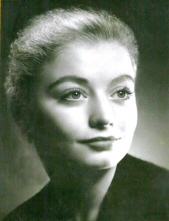 Gael A. DeMaio, 83, of West Haven, passed away at Connecticut Hospice on September 17, 2019. Born in Worcester, MA on February 13, 1936 to the late William B. and Agnes A. Murphy Riordan. She leaves her beloved husband, Arnold J. DeMaio, whom she married May 16, 1959; her loving children, John G. DeMaio of Warwick, RI, Jeffrey A. DeMaio of Norwich, Maura A. Hoffmann of Trumbull, and Michael J. DeMaio of Brooklyn, NY; her grandchildren, Ananda, Gabriel, and Jonathan DeMaio and Holly, Daniel, and Maia Hoffman; and several nieces and nephews. Gael was predeceased by her sisters, Noreen McSherry and Mary Joyce Schermerhorn, and her brothers, William and John Riordan. A former member of St. Rita Church for many years, she taught in the CCD program, sang in the folk group and chorus, and was on the church decorating committee. Gael also sang with the Community Chorus and the St. Aedan's choir. A former member of the High Lane Club in North Haven, she was involved with the 'Footlighters' in amateur productions of Broadway plays, in which she often had a starring role. Gael attended Leland Powers School in Boston and the Boston University School of Fine and Applied Arts. She also worked as a flight attendant for Northeast Airlines, and was an avid reader and accomplished cook. As a member of Oak Lane Country Club in Woodbridge and the Quechee Club in VT, she enjoyed playing tennis and golf. After marriage she stayed at home with her children and became involved in their many activities. Gael and Arnold loved to travel, where together they visited Europe, China, Mexico, Central America, and other parts of Asia. Friends are invited to visit with her family on Monday, September 23rd from 4:00 to 7:00 p.m. at BEECHER & BENNETT, 2300 Whitney Ave, Hamden. A Memorial Mass will be celebrated in St. Rita's Church, 1620 Whitney Ave, on Tuesday, September 24th at 11:00 a.m. Burial will be private. Contributions in memory of Gael can be sent to CT Hospice, 100 Double Beach Rd, Branford, CT 06405.