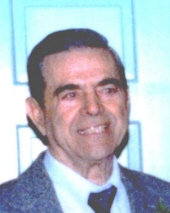 Gale DeNardis, age 96, a life-long resident of New Haven, died peacefully at Connecticut Hospice on August 3, 2016, after a courageous battle with cancer. Born on March 9, 1920, he was a son of the late Vincent J. and Pauline Petrella DeNardis. He is survived by his brothers, Richard (Ruth) and Robert; sisters, Norma Cavaliere and Dorothy Palluotto and sister-in-law, Gail DeNardis. He was predeceased by his brother Leonard and his sister Nina Onate. He was loved and respected by his many nieces and nephews and numerous other family members. In his younger years, Gale traveled to many places, including Europe and Mexico. While in Mexico he experienced a severe earthquake, and upon his return to the United States an article about his experience was featured in the New Haven Register. Gale was a very successful salesman for the Rourke Eno Paper Company for thirty-five years. On several occasions he was given recognition as their leading salesman. When he retired, he was presented with a beautiful set of golf clubs which he used for many years. Gale was an avid golfer. Until very recently, he enjoyed playing golf with his brother and friends five or six days a week. He was especially proud of his hole-in-one at the Laurel View Country Club. Gale was also a big fan of the UConn Women's basketball team. Gale was blessed with a long and interesting life. Along with golf, he enjoyed many cookouts and holiday parties with family and friends. He had many wonderful times in his ninety-six years. He will be missed by all. Friends are invited to visit with his family from 4:00 to 7:00 p.m. on Monday, August 8th at BEECHER & BENNETT, 2300 Whitney Ave, Hamden. His funeral procession will leave the funeral home at 9:30 a.m. on Tuesday for his Mass of Christian Burial, which will be celebrated in St. Rita's Church at 10:00 a.m. Interment will follow in Beaverdale Memorial Park. If desired, memorial contributions may be made to CT Hospice, 100 Double Beach Road, Branford, CT 06405 or to St. Jude's Children's Research Hospital, P.O. Box 50, Memphis, TN 38101-9929.