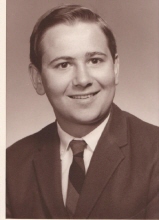 Meriden- Gary T. Krock, 66, husband of Charlene (Kondracki) Krock passed away on Monday, April 25, 2016. He was born May 10, 1949 in Meriden, a son of the late William and Emily (Hebda) Krock. Gary graduated from Maloney High School, then went on to Central CT. State University. He was employed as a motor vehicle inspector for the State of CT., Department of Motor Vehicles until his retirement. He proudly served in the U.S. Army National Guard. Gary loved duck pin bowling, was an avid Yankees and Giants fan, and sports card and memorabilia collector and dealer. In addition to his wife Charlene, Gary is survived by a son, Gary A. Krock of Meriden, a daughter, Holly Krock of Meriden, a sister, Lucille and husband Ret. Col. USMC Edward Cercone of Burke, Virginia and a brother, William F. Krock and his wife Myrlene of Hobe Sound, Florida, three nephews, a niece and many cousins. The family would like to thank Dr. Michael Clark of Aspire Family Medicine and staff, and to the first responders of Meriden. A funeral service will be held on Saturday, April 30, 2016 at 12noon at Beecher & Bennett-Flatow Funeral Home, 48 Cook Ave., Meriden. Burial will be private at the convenience of the family. Relatives and friends may call at the funeral home on Saturday, from 10am to 12noon, prior to the service. To send a condolence please see obituary at www.beecherandbennett.com.