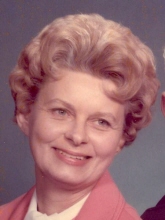 Gene Carol Novak, 81, of Whitney Ave. Hamden, died Friday Dec. 21, 2007 after a brief illness in Yale-New Haven Hospital. Gene was born in Torrington on Dec. 25, 1925, a daughter of the late John and Beatrice Ford Richard. Beloved wife of Edward Novak, she is also survived by her daughter Diane Maturo and son-in-law William Maturo of Cheshire, sister Shirley Jesanis of Wallingford, sister-in-law Mildred Richard of Hamden and several nieces and nephews. She was predeceased by her brother John Richard. Gene was a life-long Hamden resident and a member of the Mt. Carmel Congregational Church. She loved to sew and was the owner of a dressmaking business with clients across the US. Gene and her husband operated a blueberry farm for many years and were also square dancing enthusiasts. She was an accomplished baker and painter. Gene was devoted to her dog and cats and was a lover of all animals. Funeral Service and Burial will be held Private.