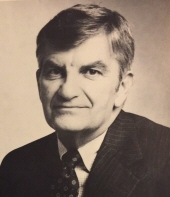 George B. Uihlein, age 95, passed away on October 1st, 2016 after a brief illness. Born on March 2, 1921 in New Haven, CT. He was a son of the late Frederick Otto Uihlein and Florence Burwell Uihlein. Mr. Uihlein was a longtime resident of Woodbridge, CT where he and his wife built their home in the 1950's and raised their family, He was predeceased by his wife of 56 years, Martha Adelizzi Uihlein ('Marti'), by his sister Ellen Fisher and his brother Fred Uihlein. Mr. Uihlein is survived by his children Eric Edward Uihlein of Bethel, CT; Roger Joseph Uihlein and his wife Shula of New Haven, CT; James Burwell Uihlein and his wife Ann Marie of Westbrook, CT; Lisa Uihlein Swain and her husband John of Newtown, CT and seven grandchildren. He most recently served as President and CEO of the Southern Connecticut Gas Company, where he was highly regarded for his leadership skills and industry expertise. He retired in 1985 after a 38-year career with the company.The last surviving crew member of the B-17 'Betty Lou's Buggy,' he served as a navigator in World War II in Europe. He flew 30 missions, receiving the Distinguished Flying Cross and the Air Medal. He graduated from Yale University in 1947 with a B.S. in Industrial Administration and Engineering. A lifelong New Haven area resident, from the early 1920s he and his family spent their summers at the Mansfield Grove Campers Association on Long Island Sound in East Haven. Intensely interested in history, Mr. Uihlein (widely known as 'Podie') became the de facto historian for the Association, publishing the definitive chronicle of its many cottages, still known as 'The Blue Book.' A passionate sailor, he could often be found at the tiller of his sailboat 'Whitecap.' He was adored and respected by all who knew him. His family will be celebrating his life at a private gathering. In lieu of flowers, donations may be made in his memory to Ability Beyond, 4 Berkshire Boulevard, Bethel, CT 06801, or Save the Sound, 900 Chapel Street, Upper Mezzanine, New Haven, CT 06510. Arrangements are in care of Beecher & Bennett Funeral Home, 2300 Whitney Ave, Hamden.