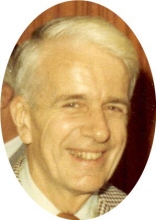 In New Haven, Wednesday, September 12, 2007, George Earl Dickerson, 90, of Hamden. Husband of the late Reta Marie Thornton Dickerson, he is survived by daughters Cynthia Russell and her husband Harvey of Cheshire and April Holeva of Bethany. He is also survived by four grandchildren, Jessica and Melissa Holeva and Michael and Derek Russell, and two sisters, Lois Loveland of Newtown and Gloria Reemsnyder of Madison. In addition to his wife, he was predeceased by his brother, Russell Dickerson. A son of the late Earl John and Georgia C. Mitchell Dickerson, Mr. Dickerson was born June 20, 1917 in New Haven, CT. He was employed as a tool and die maker and then as a quality assurance supervisor by Olin Corp./ Winchester-Repeating Arms, where he worked for 44 years. He was a member of Winchester Retirement Club, Hamden Promenaders, he is treasurer and was past president of the Humphrey Hook & Ladder Fireman's Club and was a faithful parishioner or Grace & St. Peter's Episcopal Church. Funeral service Saturday, September 15, 2007 at 11 AM at Grace & St. Peter's Episcopal Church, 2927 Dixwell Ave., Hamden. Friends may call Friday (TODAY), from 5-7 PM at BEECHER & BENNETT, 2300 Whitney Ave., Hamden. Entombment in Grace & St. Peter's Episcopal Church Columbarium will be private.