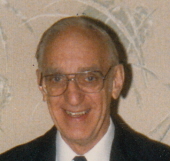 George H. Poulos, 91, of Hamden, passed away on October 27, 2012. He was the husband of the late Freida Mourtses Poulos. George was born in New Haven on April 7, 1921, son of the late Harris and Mary Laios Poulos and had lived in Hamden since 1951. He served in the U. S. Army in WWII and was a Normandy survivor. George was a member of St. Barbara Greek Orthodox Church. A 32 Degree Mason, he was past Treasurer of Day Spring Lodge # 30, A.F. & A.M. and affiliated with Scottish Rite Valley of New Haven, Lafayette Consistory, Pyramid Temple Shrine, and the New Haven Shrine Club. George graduated from Commercial High School in 1939 and received an A.S. in Accounting and a B.S. in Business Administration from Quinnipiac College in 1947. George was an accountant and credit manager for the former Simkins Industries, Inc. for 20 years and retired from the Comptrollers Office at Yale University as a Senior Financial Analyst in 1987. He is survived by a son, Andrew H. Poulos of Milford and a sister, Jane P. Porto of Jupiter, FL. In addition to his wife, he was predeceased by his daughter, Ann Poulos and sister, Katherine McManus. Friends may visit with the family at BEECHER & BENNETT, 2300 WHITNEY AVE, HAMDEN on Friday, November 2, 2012 from 4-8 p.m., with a Trisagion Service at 7 p.m. Funeral Service will be Saturday, November 3, 2012 at 10 a.m. in St. Barbara Greek Orthodox Church. In lieu of flowers Memorial Contributions may be made to St. Barbara Greek Orthodox Church, Building Fund, 480 Racebrook Rd., Orange, CT, 06477 or Shriners Hospitals for Children, c/o Pyramid Temple, 158 Research Dr., Milford, CT 06460-8236.