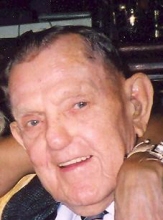 Meriden- George N. "Dooley" Baer, Jr., 87, husband of the late Dorothy Somerset Baer passed away on Friday, June 9, 2006 at MidState Medical Center. He was born in Meriden on September 5, 1918 a son of the late Goerge N. and Lillian (Krauss) Baer Sr.. He was a veteran having served his country during World War II in the U.S. Navy. Until his retirement he was a Tool and Die Maker at New Departure for 40 years. Doley was a lifelong resident of Meriden. He spent many years of his life enjoying Black Pond, New Dam, Baldwin's Pond and Lake Besek, where in his younger years he owned "Dooley's HOt Dog Stand", where all kids would get free ice-cream. He was also an avid athlete excelling in almost every sport he became involved in. He was a member of the Turner Hall where he and his family were very active, at one of their competitions Dooley took home gold medals for 7 out of 8 events. He was also a member of the Barber Shoppers. Dooley is survived by two daughters; Dori Baer of Meriden and Amy and her husband Bruce Kelley of South Windsor, two grandson, Derek Vitale of Meriden and Blake Kelley of South Windsor as well as several nieces and nephews. He was predeceased by a grandson, Trevor Vitale, two sisters and one brother. Relatives and friends may call at the Beecher and Bennett-Flatow Funeral Home, 48 Cook Ave, Meriden on Tuesday, June 13 from 4-7 p.m. Funeral service will begin at 7 p.m. Burial will be private. In lieu of flowers donations may be sent to the Meriden Humane Society, 22 East Rd., Meriden, CT 06450. To send a condolence please see obituary at www.beecherandbennett.com. Dooley's zest for life was unparalleled and he always knew what really mattered. He was a devoted father who went above and beyond for his girls. He will be remembered by all who were lucy enough to have known him.