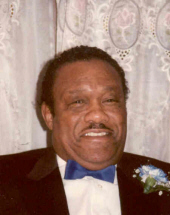 George Nobel Curry, 87, was born in New Haven, CT on June 2, 1922 to the late James and Ethel Curry. He went home on March 10, 2010 after a long illness. George was the beloved husband of Muriel Curry for 56 years and the father of Paula Curry. George was a lifelong resident of New Haven and a graduate of Hillhouse High School. He enlisted in the United States Army in November, 1942 and was Honorably Discharged in November, 1945, serving as a Staff Sergeant. While serving his country George was stationed in Burma, India and China. He received the Asiatic Pacific Theater Campaign Ribbon, Good Conduct Medal, Victory Medal, and the Soldier's Medal. In January, 1945 Staff Sgt. George Curry received a Commendation for Bravery from the United States Army. A Mars Task Force airplane crashed into a tree. George was the first to reach the crash site and rescued the pilot and 3 Infantrymen. During the crash the plane's gas tanks were crushed. Gas spilled over the engine and passengers, creating a hazardous rescue environment. Without regard for his own personal safety he rescued the trapped passengers. Upon returning home from the Army George held several jobs concurrently. He worked as a Construction Laborer, retiring from Local 455 in 1985. While a member of Local 455 he was elected one of the first Black Assistant Business Managers for that union. He was also employed at Yale New Haven Hospital Mycology Laboratory as an Animal Technologist. He was employed for 21 years at the United States Postal Service as a Mail Handler, retiring in 1987. George was also a Deputy Sheriff for the State of CT until 1989. George was also involved in politics, receiving a Merit Award from the Democratic Committee 22nd Ward in 1967. George's parents owned and operated 'Curry's Sweet Shop,' located in the heart of the Black community on Dixwell Avenue. The Curry's earned a reputation for the best homemade candy, ice cream and roasted nuts in the area. Peter Paul attempted to purchase their candy recipes but the Curry's refused to sell. The Curry's supplied candy to many local merchants who sold the Curry's candy as their own. Some of these merchants required that the Curry's deliver their candy in the evening so that their patrons would not know that the original candy maker was Black. The Curry's also operated a seasonal candy stand on Beach Street at Savin Rock in West Haven, CT. George leaves to mourn his wife of 56 years, Muriel Curry, his daughter, Paula Curry, a son George Curry, and numerous grandchildren. He also leaves a nephew, David Curry and 2 nieces, Bonnie Jones of Atlanta, GA, and Susan Vaughn, 5 Great Nieces, a Great Nephew, and a Goddaughter, Renee Burnly. He was predeceased by his parents, James and Ethel Curry, a sister, Marion Curry Blowe, and brothers, James and Alfred Curry. Alfred was George's paternal twin. Services will be held on March 18, 2010 at BEECHER & BENNETT-TAYLOR FUNERAL HOME, 410 Campbell Avenue, West Haven, CT at 11:00 AM. Friends may visit with the family prior to the service from 9:00-11:00 AM. Internment will follow at Beaverdale Memorial Park. In lieu of flowers donations may be made to the American Diabetes Association, 306 Industrial Park Rd., Ste. 105, Middletown, CT 06457.