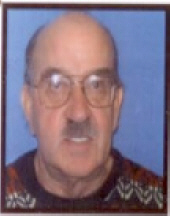 George R. Wegmann, age 68, of Hamden, passed away on August 21, 2012 at the West Haven Veteran Medical Center. George was born in New Haven on January 13, 1944, the son of the late George & Mary Roth Wegmann. He is survived by his son, George C. Wegmann & his wife Candice of Mountain View, CA; his granddaughter Zoe Wegmann and his 2 life-long friends, Albert Palmer & Edward Hoefer. He was predeceased by his sister, Hildegarde Wegmann. George worked as a painting contractor throughout the New Haven area. He was a Vietnam Veteran; he loved to travel throughout the United States and enjoyed all sports, especially the Yankees and Giants. Friends are invited to attend his Military Honors on Monday, September 3, 2012 (Labor Day) at 10:00 AM in Beaverdale Memorial Park, Section P, New Haven. Contributions in his memory may be made to the American Heart Association, 5 Brookside Drive, Wallingford, CT 06492. Arrangements are in care of BEECHER & BENNETT FUNERAL HOME, 2300 Whitney Ave., Hamden.