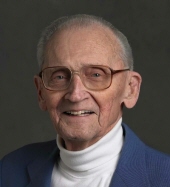 George R. Wildman, age 88, passed away on May 22, 2016 in the care of Vitas Innovative Hospice at St. Mary's Hospital in Waterbury. George was born in Waterbury on July 31, 1927, a son of the late Abil P. & Martha Schulte Wildman. He was predeceased by his wife Gertrude 'Trudy' Steinle Wildman in 2013 and brothers Emil & Philip Wildman. He is survived by his son Karl G. Wildman & his wife Joy of Hamden; his grandchildren Kelsea, Alexa & Reagan Wildman and several nieces & nephews. A lifelong resident of Connecticut, growing up in Watertown on a poultry farm. He served his country twice in the Navy. First in World War II as a recruiter in Boston, at the war's end opted for the reserves. He was called back to duty in Korea, being an aid to the Captain on the Battleship New Jersey (BB62). He returned home to study advertising at what is now the Paier College of Art. During the 1950 and 60's, he became a successful commercial artist, first working for an ad agency, and then becoming a freelance artist. During this time, he married and started a family. He began producing freelance comic book art for Charlton Press in Derby, Connecticut. Charlton acquired the rights to many King Feature characters. George was offered a contract to produce the POPEYE illustrations. He was hired as assistant editor, in 1971 was promoted to managing editor, and eventually executive editor. George has been recognized for his work with a nomination for the Shazam Award for Best Penciller (Humor Division) in 1974, and another nomination for the Shazam Award for Best Inker (Humor Division) that same year. A crowning achievements include a King Features Career Guidance series, (featuring Popeye), 'Learn how to be a Cartoonist' special, and a Popeye epic 50th anniversary comic book special published in 1979. Wildman's tenure as editor continued through 1985. George left Charlton, moving into a freelance comic book and children's book illustration career. In April of 1982, the National Cartoonists Society awarded him 'Best Cartoonist, Humor Division.' Random House contracted George to illustrating a classic Popeye 'Pop-Up Book' which was in conjunction with the Robert Altman film. It became a best-seller and is on display at the Smithsonian Institution. George was also invited to produce a painted wooden Easter egg for the 1983 White House Easter event. This egg is also housed in the Smithsonian. His pencils, inks and paints graced publications published by Disney, Hanna-Barbara, Time Warner characters along with countless designs for various businesses. In 1994, George and wife Trudy Wildman were honored in a gala festival in Chester, Illinois, celebrating the 100th birthday of the creator of Popeye, Elzie Crisler Segar. Wildman received the Popeye Fan Club's Lifetime Achievement Award and performed a sketching show to a standing-room-only crowd. A return visit to Chester in 2004, to celebrate the 75th anniversary of Popeye. Recently, the National Cartoonists Society, Connecticut Chapter, presented George with a Lifetime Achievement Award. He continues to receive mail from Popeye fans around the world. George was a former Charter Member of the Hamden Elks Lodge # 2224 and a Honorary Member of the Masonic Harmony Lodge # 42. Until his death, George and son Karl operate their own advertising agency, producing a wide variety of original characters and has many individual self-produced products which he continues to offer. A fine example is the 2015 Brother George Holiday Ornament. Friends may visit with his family on Thursday, May 26 th, from 4:00 to 7:00 PM at BEECHER & BENNETT FUNERAL HOME, 2300 Whitney Avenue, Hamden and may attend his Prayer Service beginning at 5:00 PM and Military Honors at 6:45 PM during the calling hours. Interment will be private. Contributions in George's memory may be made to Vitas Charitable Foundation, 199 Park Road Ext, Middlebury, CT 06762.