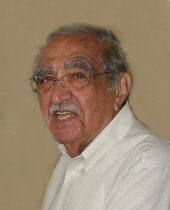 George Theodos, age 86, of Hamden, passed away on November 11, 2015, of complications from Parkinson's Disease. He was the husband of Antonia Scuris Theodos, to whom he was married and resided with in Hamden for 56 years. Born in New Haven on November 24, 1928, he was a son of the late Stelios & Artemis (Papadopoulos) Theodos. He is also survived by his daughters, Artemis Simerson (Gordon) of North Branford and Stephanie Hubbard (Thomas) of Meriden, grandchildren Gabriel & Darian Simerson, step-grandchildren Matthew & Rebecca Hubbard, a nephew and three nieces. He was predeceased by his sister, Kay Chaltas and his brother, Paul Theodos. George was a professional saxophonist, playing from a young age as a freelance musician with various bands throughout the northeast. He was a master musical instrument repairman and in 1968 opened George's Music, a repair and retail shop on Whitney Avenue, which he owned and operated with his wife until 2002. He took great pride in running his business with integrity, treating his customers and their instruments with the utmost respect, and great pleasure in passing down his love of music to generations of Connecticut schoolchildren. He also gained distinction for customizing instruments for his clients' unique needs. All who knew him knew his life revolved around music, his family, and living with quiet dignity. Friends may visit with his family at BEECHER & BENNETT FUNERAL HOME, 2300 Whitney Ave., Hamden, TODAY, from 5:00 to 8:00 PM and may attend his funeral on Saturday, 9:00 AM from the funeral home followed by funeral services at 10:30 AM at St. Barbara Greek Orthodox Church, 480 Racebrook Road, Orange. Interment will take place in Beaverdale Memorial Park. In lieu of flowers, contributions in his memory may be made to the National Parkinson Foundation, 200 SE 1st St., Suite 800, Miami, FL 33131, or to St. Barbara Greek Orthodox Church.