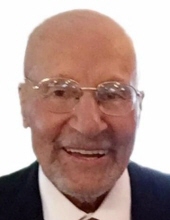 George Veronis, 93, of New Haven, loving husband to Anna 'Kim' Veronis, passed away on Sunday, June 30, 2019. He was born in New Brunswick, New Jersey on June 3, 1926 to the late Nicholas and Angeliki Veronis. Along with his wife Kim, George leaves his daughter Melissa Odell and her husband Vinnie of Maryland, his son Benjamin Veronis and partner Christopher Gilbert of California, and his grandchildren Jocelyn Laracuente and her husband Nelson, and Wesley Odell. He also leaves his sister Mary Thompson and brothers John (Lauren) Veronis, and Alexander (Pearl) Veronis. He was predeceased by his brother Peter (Babs) Veronis, and sister Elinor Veronis. He was a Professor at Yale since 1966, Department Chair from 1976-1979, head of the Applied Mathematics Program from 1979-1993, and named the Henry Barnard Davis Professor of Geophysics and Applied Science in 1985. George served in the US Navy submarine program in the Pacific during World War II. He attended Lafayette College to study mathematics, then to Brown University to get a PhD in Applied Mathematics in 1954. After his PhD, he held research positions at the Institute for Advanced Study at Princeton, the Woods Hole Oceanographic Institution, and at MIT, before joining the Yale faculty in 1966. He was the editor of the Journal of Marine Research for 37 years, and a co-founder (in 1959) and director of the Geophysical Fluid Dynamics Summer Program at the Wood Hole Oceanographic Institution in Woods Hole, Massachusetts, for which he shared the AGU Award for excellence in Geophysical Education in 2008. George's many honors included being elected a member of the American Academy of Arts & Sciences in 1963, a Fellow of the American Geophysical Union in 1975, a member of the Norwegian Academy of Science & Letters in 1981, and a member of the US National Academy of Sciences in 1994. George was a runner for many years, and in the later years a long walker. He loved bird watching and enjoyed spending occasional winters in Australia. He had a gift for languages and spoke fluent Greek and Swedish. Friends are invited to visit with George's family on Friday, July 5th from 11:00 a.m. to 12:00 p.m in the Beecher & Bennett Funeral Home, 2300 Whitney Ave., Hamden. A service celebrating George's life will follow at 12:00 p.m. Interment will be private at the convenience of his family. Memorial contributions in his name may be made to the Greater Valley YMCA-Easton Branch, 1225 West Lafayette St., Easton, PA 18042 (www.gv-ymca.org), The 300 Committee Land Trust, 157 Locust St., Falmouth, MA 02540 (www.300committee.org), or to your local Audubon Chapter by visiting www.audubon.org.