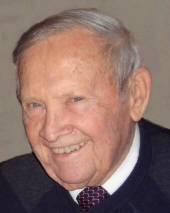 Meriden - George W. Hallbach, 92, husband of Dorothy (Bonciani) Hallbach, passed away peacefully on Thursday, Feb. 18, 2016 at Masonic Healthcare Center in Wallingford, his beloved wife of 69 years at his side. George was born July 24, 1923 in Meriden, a son of the late Ernest 'Smoke' and Mary (Ficken) Hallbach and was a lifelong resident there. He graduated from Meriden High School in 1941 where he was known as the 'Mighty Might of Room 8' and was a 'persistent participant' in the MHS athletic department. George proudly served his country during World War II as a first Lieutenant in the U.S. Army Air Force, a member of the 488th Bombardment Squadron in the 340th Bombardment Group. He was a B-25 bomber pilot stationed in Corsica who flew a remarkable 59 missions in the Mediterranean Theater and, among other military operations, participated in the dangerous Brenner Pass missions designed to stop enemy troop infiltration and destroy supply lines between Italy and Austria. For these missions, he was awarded the Distinguished Flying Cross, an Air Medal with 7 Oak Leaf Clusters, three battle stars, and a unit citation. In 2009, George was honored with the Connecticut Wartime Veterans Service Medal, along with other veterans, for his wartime service in a special ceremony. Following military service, George obtained a Bachelor of Science degree from Cornell University's Statler School of Hotel Administration and applied his business education to a successful career in the food service industry. He was an officer and director of the Hallbach Company, Inc., The Hallbach Restaurant, Inc. and the Ernest Realty Company which operated the 1830 House Restaurant, The Hallbach Restaurant and several real estate entities in Meriden. For over 40 years, companies that George managed fed private schools, colleges, industrial cafeterias and summer camps throughout Connecticut, Massachusetts, Maine and New York. He ultimately owned and operated Connecticut Cafeteria Management in North Haven before retiring at the age of 80. George was a past president of the Meriden Rotary Club as well as a former trustee and chairman of the Rotary Foundation. He was awarded a Paul Harris Fellowship, the highest honor given by the Rotary Club to a member of the community and was invited to attend the International Rotary Convention with his wife in Rome, Italy in 1979. He was also a past president of the Meriden YMCA and volunteered countless hours for other community organizations. He was a mason with the Meridian Lodge and a faithful lifelong member of the Immanuel Lutheran Church in Meriden. George had a passion for life, was an expert event organizer and participated with great enthusiasm in many sports and hobbies. He lived a life defined by strength of character, hard work, generosity of spirit, loyalty and optimism. A devoted family man, George was a partner to his wife and an impeccable role model not only for his five children but also for his grandchildren and many nieces and nephews. Anyone who knew George could tell you that he enjoyed life to its fullest and that he had a wide network of schoolmates, business colleagues and friends. He was an avid Red Sox and UConn Women's Basketball fan and coached little league baseball. He was a member of the Meriden Men's Church Bowling League for many years, loved playing golf, and pitching horseshoes or playing cribbage at family gatherings. Among his greatest joys, George loved summers at the family cottage in Madison, CT, designing, planting and tending his beautiful well-manicured gardens and offering his advice, time and talents to nurture the gardens of his children. He is survived by his four daughters, Constance and husband, Peter Engelking of Old Lyme, Ellen Lazzara of North Haven, Karen Lesiak and husband Frank, of Meriden, Kristen Fitzgerald and husband Michael, of Acton, MA; and a son Kurt G. Hallbach of Sandown, NH. He leaves 8 grandchildren, Emily E. Valentino and husband Jason of Katonah, NY, Joshua A. Engelking and wife Anna of Peekskill, NY, Michael Lazzara of New Haven, CT, Jeffery Lazzara and wife Bianca of Madison, CT, David Hallbach and wife Lisa of Barrington, NH, Lesa Hallbach of Manchester, NH, and Olivia and Grace Fitzgerald of Acton, MA; he also leaves 7 great-grandchildren, 20 nieces and nephews, and his sister, Dorris H. Rochette, of Meriden. George was predeceased by his brothers, Robert H. Hallbach of Meriden, Ernest E. Hallbach, Sr. of Cheshire; sisters, Florence H. Mosier and Edna H. Leidtke of Meriden, a sister-in-law Madeleine S. Hallbach of Cheshire, and brothers-in-law, James Mosier, William Leidtke, and Joseph A. Rochette, all of Meriden. Three nephews, Frederick Liedtke, James Mosier Jr. and Jonathan Rochette and a niece, Joanne Rochette Dobensky also predeceased George. George Hallbach served his country, his community and, most especially, his immediate and extended families. He will be best remembered for his generous and gregarious nature, his wit and sense of humor, and the many vivid stories he shared. George will be greatly missed by his family and by everyone who knew him. Relatives and friends may call at Beecher & Bennett-Flatow Funeral Home, 48 Cook Ave., Meriden on Friday, February 26 from 4-8 pm. George's funeral will be held on Saturday, February 27 at 9:30 am at the funeral home with a Christian service following at 11:00 am at the Immanuel Lutheran Church, 164 Hanover St., Meriden. The Rev. Christopher McKinstry will officiate. George will be laid to rest with Military Honors at the Sacred Heart Cemetery on 250 Gypsy Lane in Meriden. The family wishes to extend special thanks to Susan Shultz of the Department of Aging, the Masonicare VNA, Dr. John Huang and his staff for their very special care and attention. Donations may be made in George's name to the Immanuel Lutheran Church 164 Hanover St., Meriden, CT 06451 or the American Heart Association, P.O.Box 417005, Boston, MA 02241-7005 or www.donate.heart.org.