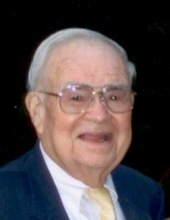 Gerald 'Jerry' J. Nolan, 86, husband of 60 years of the late Janet Cote Nolan, passed away May 25, 2015 at his home surrounded by his three sons. He was a lifelong resident of Hamden, CT born June 11, 1928, son of the late Christopher and Helen Fitzgerald Nolan. Loving father of Mark (Mimi) Nolan of Waukesha, WI, Scott (Judy) Nolan of Middleton, WI and Craig Nolan (Jackie Baugher) of New Britain, CT. He is also survived by 8 grandchildren and 5 great- grandchildren. He was predeceased by a sister, Marjorie N. Dowling (Robert). Jerry earned B.S. and M.S degrees from what is now Central CT State University and also earned a 6th year degree in administration from Southern CT State University. Jerry's 36 year career with the Hamden Board of Education included 17 years as an Industrial Arts Teacher, 19 years as the Director of Adult Education and also served as Faculty advisor for the Hamden High School class of 1959 and was varsity tennis coach for many years. Jerry served in the U.S. Army for 2 years at the Aberdeen Proving Ground where he attained the rank of Sergeant. Jerry supported his community and profession by participating in the Hamden Federation of teachers for 12 years, 6 years as President; The CT Association of Public School Adult Education for 18 years including 2 years as President; life and charter member of the West Woods Volunteer Fire Co. #9, president for 8 years; Hamden Planning and Zoning Commission 9 years; Founding member of St. Joan of Arc Church serving as a Lector for 25 yrs. and Parish Council for 10 years; most recently Jerry was an advocate for Alzheimer patients and caregivers as a Volunteer at the Clelian Adult Day Center, Hamden CT as well moderating multiple support groups. Jerry and Janet enjoyed the many winters they spent in Florida and cherished the friends they made during their travels each year. Friends may attend his funeral on Saturday May 30th at 10:00 am from Beecher & Bennett Funeral Home, 2300 Whitney Ave., Hamden, followed by his Mass of Christian Burial to be celebrated at 11:00 AM in St. Joan of Arc Church, 450 West Todd St, Hamden. Friends may also visit with his family at the funeral home on Friday from 4:00 to 8:00 PM. Interment with Military Honors will take place in St. Mary's Cemetery, Hamden. Contributions in his memory may be sent to the Clelian Center, 261 Benham St., Hamden, CT 06514 or to the Alzheimer's Assoc. of CT, 2075 Silas Deane Highway, Suite 100, Rocky Hill, CT 06067.