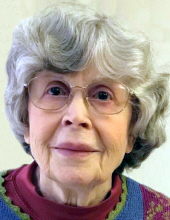 Geraldine Frost Nye Frei, originally of North Haven, a resident at the Whitney Center since 2002, passed away peacefully after a brief illness at the age of 95. Gerry grew up in North Haven when it was still a very small town with many farming families and orchards. She graduated from Lasell Junior College and met her husband when he was a doctoral candidate at Yale. They married in 1948 and moved to Indiana, and then to Texas, where he held teaching positions. In 1957, with three children in tow, they returned to New Haven, where Hans joined the Yale faculty in religious studies. During his time at Yale, the family took advantage of sabbaticals, spending a year in Germany in 1959, and another wonderful year in 1967 in Cambridge, England. In 1972, Gerry and Hans moved to Ezra Stiles College, one of Yale's residential colleges, where Hans served as master of the college. For eight years they enjoyed the rich experience of living amid three hundred undergraduates, some of whom became lifelong friends. Gerry's own career blossomed from 1981 to 1993 when she worked as the patient advocate at the Yale Health Plan during a period of substantial change in the healthcare industry. The job put to use her interest in helping others, and often required her to navigate difficult territory with her exceptional diplomatic skills and compassionate nature. After retirement she continued her connection there as representative of the retirees on the consumer advisory committee. She also found meaningful work as a literacy volunteer. After moving to the Whitney Center, she served on the wellness committee, and co-edited the monthly literary publication, 'The Whitney Word.' At the age of 80 she began writing poetry, finding that after a lifetime of reading, she had her own gift for words. She participated in several poetry festivals at the Whitney Center, and took great pride in being accepted into a group that included published authors. She never stopped expanding her circle of friends, and talked to her children frequently about how gratifying it was to make new friends so late in life. Gerry was predeceased by her husband of forty years, Hans W. Frei, in 1988. She is survived by her children; Thomas Frei and Emily McGalliard and husband Bruce, both of Connecticut, and Jonathan Frei and partner Robin Beshers of California; grandchildren Gabriel Frei, Alexander Frei, and Maria Frei of California; and Ethan Frei, Samuel Frei, Ben McGalliard, Elena McGalliard, and Peter McGalliard, all of Connecticut. In the last days of her life she was able to enjoy pictures and videos from California of her newborn great-grandchild (courtesy of Gabriel and partner Sara), Myloe Hans Frei, whose birth and wonderful name brought a very wide smile to her face. In lieu of flowers, the family requests that memorial donations be sent to The Whitney Center Benevolence Fund, 200 Leeder Hill Drive, Hamden, CT 06517 or to another charity of the donor's choice. The family will have a private service. Arrangements are in care of Beecher & Bennett Funeral Home, 2300 Whitney Avenue, Hamden.