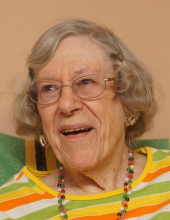 Gertrude Rose Lipfert Turner was born the month before the start of World War I, on July 21, 1914 in Meriden, CT to Rose and Ernest Lipfert of Meriden. Beloved by all, she slipped away on July 22, 2018, one day after her 104th birthday. A life-long resident of Meriden, Gert came of age when it was a bustling manufacturing town and fell in love and married her devoted husband, Eugene (Gene) Turner in 1935, in the midst of the Great Depression. During World War II, she worked at New Departure, inspecting ball bearings for automobiles and airplane engines. In 1942, Gert and Gene bought their first house, the old pumphouse on Hanover Pond. They spent many evenings and weekends during the War working on it, turning it into home, often interrupted in the evenings by sirens announcing a blackout. This is where she spent the rest of her life, including her last days. The Turner home was a hub for family and friends from near and far, sometimes popping in unexpectedly and always welcomed. Gene was a school teacher and they often travelled with their two children, Sandy and John, during school vacations, for history and fun, going all over the East Coast and to California, various parts of Canada and England. For her 90th birthday, Gert traveled to Alaska to explore Denali and the glaciers with her children, son-in-law Jeff and beloved granddaughter, Simone. In the midst of these joyful events, she cared for her mother, her aunt, and Gene as they each struggled with illness, giving them comfort and help as they concluded their lives. She took much joy in her family, in her church and in cooking, especially for Sunday dinners and family gatherings. She was often happily in her gardens along the pond with its wildlife, trees and flowers, many planted by her long ago. She was an active member of her church for 86 years, and recently its flower lady. As she passed her 100th year, she woke each morning, grateful for the day, for her son, John, who was always by her side, for her body that mostly worked and for all that she still could do. Gert is survived by her son, John Turner of South Meriden, her daughter and son-in-law, Sandy and Jeff Bodmer-Turner of Manchester-by-the-Sea, MA, her granddaughter, Simone Bodmer-Turner of Brooklyn, NY and her niece, Joy Starratt and her partner, Jay Anderson, of Cromwell along with many nieces and nephews. She was predeceased by her sister, Dorothy Rhinehart, of Cromwell and their brother, Donald Lipfert, of Woolwich, ME. A memorial service to celebrate her life will be held on Saturday, August 4th at the Beecher & Bennett-Flatow Funeral Home, 48 Cook Avenue, Meriden, CT. The service will be at 11:00 a.m., with friends and family welcome beginning at 10:00 a.m., followed by a graveside service at Walnut Grove Cemetery and then a gathering to share our sorrow, joys and stories at the Christadelphian Chapel, 145 Evansville Avenue, South Meriden, CT. In lieu of flowers, donations may be made to the Christadelphian Bible Mission of the Americas (c/o Christadelphian Chapel, 145 Evansville Ave., Meriden, CT 06451) that provides spiritual and material sustenance to the poor or to Franciscan Home and Hospice Care (267 Finch Ave., Meriden, CT 06451) who helped Gert care for Gene and helped her family care for her. To share a condolence with Gert's family, please visit www.beecherandbennett.com.