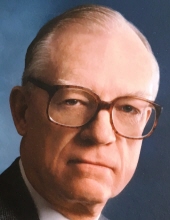 Gilbert F. Hogan, former cardiologist, 88, died September 26th, 2019 at Yale-New Haven Hospital Saint Raphael Campus in New Haven, CT, from a sudden illness. He is survived by his five sons, eleven grandchildren, three great-grandchildren, and his beloved friend and companion Elizabeth (Betsy) Demir. Dr. Hogan was a resident of The Whitney Center in Hamden, CT, where his many friends and acquaintances mourn his loss. Gilbert was born in New Haven, CT in 1931 to Frank and Grace Hogan. He was a graduate of The Hotchkiss School ('49), Yale University ('53), and Yale Medical School ('57). Gilbert was married to Carol Donovan in 1957; they lived in Woodbridge, CT for 50 years and were proud parents of five boys, had numerous cherished friends, and enjoyed a marriage of 58 years before Carol died in 2015. Gilbert served with the rank of captain in the U.S. Army from 1958-60, and was stationed at Fort Eustis, Virginia. Following his residency at Boston City Hospital, Gilbert began a medical practice in New Haven which spanned nearly 40 years, specializing in Internal Medicine and Cardiology, and affiliated with Yale-New Haven Hospital. In retirement, Gilbert contributed his time to many New Haven area organizations. He served as President of the Yale Medical School Alumni Association, President of the New Haven Historical Society, Chairman of the Whitney Center Board of Directors, President of the English Speaking Union, and member of the Woodbridge Town Planning and Zoning board, just to name a few. In addition, he tutored newly arrived immigrants in English, taught Yale Medical students the art of physical examination, and interviewed undergraduate applicants seeking admission to Yale. Gilbert loved the outdoors, especially spending time with his family at his mountain home in Quechee, VT, where he downhill and cross country skied and hiked. He particularly enjoyed spending time with his grandchildren and learning about their interests and accomplishments. Gilbert's interests included photography, collecting and refinishing antique furniture, golf, tennis, and reading on topics ranging from medicine and history, to economics and physics. In July of 2017, Gilbert and Betsy sold their respective homes and moved into Whitney Center (WC). At Whitney Center, Gilbert and Betsy developed happy friendships with countless residents and staff. Gilbert continued to lead a vibrant and productive life, serving on several WC boards, and taking advantage of the many cultural and social events, and other opportunities the WC presented. Gilbert stayed involved with Yale via the Berkley Fellows and Yale Medical School and was planning on attending his 70th Hotchkiss graduation reunion later this month. Gilbert touched the lives of everyone he knew, whether a long-time friend or acquaintance, and was the central force within his own large family. He strove in life, as he would say, to 'give back' to society for all the help, opportunities, and advantages he himself had been given. He will be sorely missed by his extensive family, his closest friends, and many others. A Memorial Mass of Christian Burial celebrating Gilbert's life will be held on Saturday, October 5th at 11:00 a.m. directly in Our Lady of the Assumption Church, 81 Center Rd., Woodbridge. Burial will follow in East Side Cemetery. Should friends desire, contributions in his memory may be sent to VNA Community Healthcare & Hospice, 753 Boston Post Rd., Guilford, CT 06473.