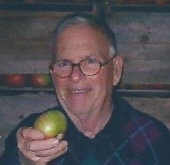 Gilbert L. Benham, 84, of Hamden, passed away on March 15, 2013 after his brave battle with Alzheimer's disease and recent stroke. Born in New Haven, on September 10, 1928, he was the son of the late Lester Merwin and Frances Smith Benham. He was predeceased by his wife, Eva Robertson Benham and is survived by a daughter, Leslie B. Kohnke of West Hartford; two grandchildren, James M. Kohnke and Dora E. Kohnke, both of West Hartford; a sister, Jane B. Dutton and brother-in-law Thomas Dutton of Florence, VT; a brother, Henry C. Benham and sister-in-law, Mary Ann Benham, of Madison, a nephew, Ron Benham (who resided with Gil) and many other nieces, nephews and grand nephews. Gil was well-known for his kind disposition and gentle nature. He handled his illnesses with grace. Always smiling and so giving of the fruits of his labor. His passions included farming and beekeeping. He was a graduate of the UCONN School of Agriculture where he earned a degree then spent the rest of his years managing Benham Farm and beekeeping (which he did with great pride). Gil served on the board of Trustees at his place of worship, Hamden Plain United Methodist Church and on the Board of Trustees for the Hamden Plains Cemetery Association. For many years, he was a volunteer fireman with the Dunbar Fire Dept. He was also an avid member of the Y's Men's Club. If Gil wasn't farming, he could be found fishing, for he loved the water and the shore. He was a devoted father, grandfather and church member. Friends are invited to visit with Gil's family on Monday, March 18th from 5:00 to 7:00 p.m. at BEECHER & BENNETT, 2300 Whitney Ave., Hamden. Also, his Funeral Service will be held at Hamden Plains United Methodist Church, 15 Church St., Hamden on Tuesday at 10:00 a.m. followed by a burial in Hamden Plains Cemetery. Contributions in Gil's memory may be sent to CT Hospice, 100 Double Beach Rd, Branford, CT 06405 or Alzheimers Association 2911 Dixwell Ave., Suite 104, Hamden, CT 06516 or Arthritis Foundation, 35 Cold Spring Rd., Suit 411, Rocky Hill, CT 06067 or 1-800-541-8350 or CitySeed, Inc.817 Grand Ave., No. 101, New Haven, CT 06511.