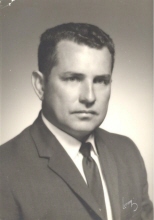 Gilberto Mejias, 85, passed away peacefully on Wednesday, December 24, 2014. He was born August 28, 1929 in Aguada, Puerto Rico, a son of the late Paulino and Carlota (Torres) Mejias. He was an active member of St. Rose of Lima Church, loved vegetable gardening, and spending time with his grandchildren. Gilberto is survived by two daughters; Irma (Luis) Rivera of E. Berlin and Denise Mejias of New Britain, two sons; Ken (Joan) Mejias of Prospect and Danny Mejias of Meriden, and four grandchildren, Eugene 'Jay' and Brandon Johnson and Casandra and Gabriel Rivera. He is also survived by three siblings; Mercedes Torres of Meriden, and Efigenio Mejias and Aurelia Sanchez, both of Puerto Rico, as well as many loving nieces and nephews. He was predeceased by several brothers and sisters. A Mass of Christian Burial will be celebrated on Monday, December 29, 2014 at 11:30 AM at St. Rose of Lima Church, 35 Center St., Meriden. Burial will follow at Walnut Grove Cemetery in Meriden. Calling hours will be privately held for his close family only. Beecher & Bennett-Flatow Funeral Home, 48 Cook Ave., Meriden has been entrusted with the arrangements. The family would like to thank the staff at Coccomo Healthcare Center for their loving care of Gilberto.