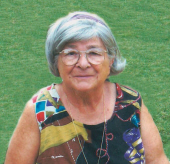 Gladys (Jafferis) Kruchok, 91, of West Haven died peacefully at Branford Hospice on Friday, April 10, 2015. She was the daughter of the late Thomas and Katherine Garsick Jafferis. She is survived by her daughter, Kathy Davis and her husband Raymond Davis of Guilford and her son John Kruchok of Branford; granddaughters Tara (Monaco) Gallo of Branford, Tanya (Monaco) Ciarleglio of Middletown and her husband Gary; great-grandchildren Joseph Gallo and Natalie Ciarleglio, Kyle and Kayla Shields, and Paige Davis, as well as many nieces and nephews. She leaves behind brothers George (Anne) Jafferis and William (Elvira) Jafferis. She was preceded in death by her sister, Katherine Piurek and a brother, James Jafferis, both formerly of West Haven. The family wishes to express their gratitude to her special friends Anne Bosse and Jean Cherniavsky, to Doctors Emily Nolfo, Christopher Loscalzo, and Kevin Twohig, and to the staff, patients, and their families at Branford Hospice for their support. In her early years, Gladys worked for the Chance Vought Girls Fire Brigade, which was the only fire organization in Connecticut. She co-owned and operated Blue Ribbon Cleaners on Elm Street in West Haven in the 1960's and 70's. After semi-retiring, she devoted the next 12 years as a parent aide for the Coordinating Council of Children in Crisis, bringing Yale undergraduates into families needing 'big brothers and big sisters.' Under her leadership, volunteers doubled to around fifty and her ability to recruit and retain students in the demanding program exemplified her special gifts and love. She was awarded the New Haven Foundation's 'Elm-Ivy' award in 1989. She also volunteered at Hospice for eight years. Gladys loved the beauty of Block Island and spent many summers at the Surf Hotel. Funeral services will take place at the Holy Transfiguration Orthodox Church, 285 Alden Avenue, New Haven (Westville), Connecticut at 11:00 AM on Tuesday, April 14th, internment will follow at Beaverdale Memorial Park in Hamden. Family and friends may call at BEECHER & BENNETT - TAYLOR FUNERAL HOME, 410 Campbell Avenue, West Haven this evening (Monday) from 4-8 PM, with a panakhida service celebrated at 7:30 PM, or Tuesday at 10:00 AM at the funeral home before the procession departs for the church at 10:30. Contributions in Gladys' memory may be made to Holy Transfiguration Church or to Branford Hospice, 100 Double Beach Rd., Branford, CT 06405. For more information or to send a condolence to her family, please visit www.beecherandbennett.com.