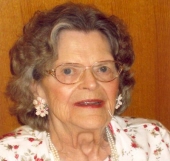 Meriden- Gladys L. Miller, 96, passed away peacefully on Wednesday, October 1, 2008 at the Bradley Home. She was born January 29, 1912 a daughter of the late Charles and Sarah Dollie (Allen) Haines. Gladys was a hairdresser, working from her home for many years. She was a member of the New Life Church and a woman of deep faith in the Lord. The family would like acknowledge and thank everyone at the Bradley Home and the nurses at Mid State Medical Center, Pavillion A, for the exceptional care Gladys received while in their care. Gladys is survived by a daughter, Charla and her husband Edward Wilson of Meriden, four grandchildren, Marty Wilson Sr. of Wallingford, Michael and his wife Joann Wilson of Cheshire, Jeffrey Wilson and Allison Wilson both of Meriden, ten grandchildren, Jeramie Randi and David Wilson, Michael Jr., Alex and Jessica Wilson, Jeffrey Jr. and Madison Wilson, Ricky Wilson and Gabriel Handley and nine nieces. She was predeceased by a great-grandson, Marty Wilson Jr. , four brothers and four sisters. A funeral service will be held on Tuesday, October 7, 2008 at 10:00 a.m. at New Life Church, 262 Bee St., Meriden, officiated by the Rev. Will Marotti. Everyone is asked to go directly to the church. Burial will follow at St. Sebastian's Cemetery, Middletown. There will be no calling hours. Donations in Gladys' memory may be made to the Bradley Home, 320 Colony St., Meriden, CT 06451. The Beecher & Bennett-Flatow Funeral Home, 48 Cook Ave., Meriden has been entrusted with the arrangements.