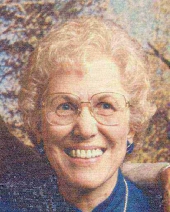 Gladys P. Hansen, 87, of 51 Rimmon Road, North Haven died suddenly on Monday, August 14, 2006. She has gone to join her beloved husband, Harry Hansen in eternal rest. She leaves her two daughters, Carol Thorner of North Adams, MA and Joyce Thorner of Newington, also Harry's three daughters and families, Gail (Leonard) DeNardis of North Haven, Joyce Hansen of Cape Cod, MA and Ruth (James W.) Turner of Bedford, NH; six grandchildren and many who called her "Grandma Gladys". She is also survived by her brother, Paul A. Paulson and his family of San Diego, CA and many cousins. She was predeceased by her first husband, Eric A. Thorner and a sister, Helen Paulson Duffner. She was born in New Haven on July 9, 1919, daughter of the late Agda Anderson Paulson and John A. Paulson. She attended school in Hamden, and was a member of the first graduating class of Hamden High School. She attended New Haven State Teacher's College, worked during WW II at the United Illuminating Company and for many years at the Second New Haven Bank. In her retirement, she and Harry enjoyed extensive traveling, spending winters in Florida for 20 years, visiting and entertaining family and friends. She was a faithful life-long member of Bethesda Lutheran Church in New Haven, active in their Doubles Club and Elizabeth Circle. Funeral Service Friday, Aug. 18 at 10:30 a.m. at Bethesda Lutheran Church. Friends may call Thursday from 4 -8 p.m. at Beecher & Bennett, 2300 Whitney Ave., Hamden. Memorial Contributions may be made to Bethesda Lutheran Church, 305 St. Ronan St., New Haven, CT 06511.