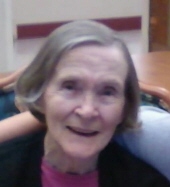 Gladys Wetmore Brown, age 85, of Hamden passed away on January 24, 2015. Gladys was the widower of Stanley E. Brown. Born in Hamden on September 9, 1929 she was a daughter of the late Clement R. & Marion J. Kirk Wetmore. She is survived by her daughter Kathleen & her husband Douglas Roston; her grandchildren Benjamin (Satsuki) Roston, Michael (Keri) Roston and Mindy (Malcolm) Stevenson; great grandchildren Alec & Monet; her sisters Laura Wolf of Hamden, Gloria (Michael) Scarpa of Wallingford & Lila (Fred) Stevens of New Orleans, VT; her brothers former Captain Co. #7 Erwin 'Jim' (Beverly) Wetmore of Hamden and former Fire Chief Paul (Betty) Wetmore, Sr. of Hamden. Gladys also leaves several nieces and nephews. She was predeceased by her sisters Muriel & Viola Wetmore & Ellen Krezminski & her brother Duane Wetmore. Gladys was a former bookkeeper for Gilbert & Richards Co. and was a CNA. She volunteered cooking at the Davenport Senior Center and was a member of the Hamden Grange. Friends may visit with her family at Beecher & Bennett Funeral Home, 2300 Whitney Ave, Hamden on Thursday from 9:00 to 11:00 AM prior to her Funeral Service begining at 11:00 AM. Interment in Hamden Plains Cemetery will follow. Contributions in her memory may be made to the Alzheimer's Association, P.O. Box 96011, Washington, DC 20090-6011.