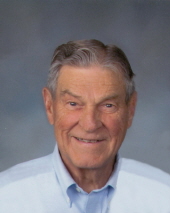 Glenn Edward Hartsoe, Sr., 84, husband of Lois McKay Hartsoe of Ashlar Village, Wallingford, passed away Monday, July 29th after a long illness. Son of the late Russel E. Hartsoe and Laura A. Hartsoe, he was born in Hamilton, OH on August 2, 1928 and graduated from Quarryville High School in 1944. He then graduated with honors from Penn State University in 1948 at the age of 19 with a B.S. degree in Engineering. In 1948 Glenn started with the Pennsylvania Railroad which later merged with and became Conrail. He was Chief Regional Engineer of the Northeast Region when he retired in 1983. He then did extensive consulting work in the railroad industry working with HNTB consultants and over 14 years with the North Carolina Railroad, stopping only a few weeks ago. Mr. Hartsoe was a past member of the Industrial and Professional Advisory Council at Penn State University; a past President of the New England Railroad Club; and he was active with AREMA, the American Railway Engineering Maintenance Association. Glenn was a member of the Hamden Plains United Methodist Church, and resided in North Haven for 43 years before moving to Wallingford in 2012. In addition to his wife Lois, he is survived by his son Ted (Terrie) Hartsoe of Wallingford; his daughter Lauren ( Gary ) Rule of Portland, OR; brothers James R. Hartsoe of St. Paul, MN; and Roger E. Hartsoe of Pequea, PA; three grandchildren, Kaitlin Hartsoe of NYC, Daniel and Kelsey Hartsoe of Wallingford. He was predeceased by a daughter Lynne Elaine Hartsoe. Graveside services will be held at Silverbrook Cemetery, Wilmington, DE on Saturday, August 3rd at 11 a.m. A memorial service will be held on Saturday, August 24th at 1 p.m. at Hamden Plains United Methodist Church, Hamden. In lieu of flowers memorial contributions may be made to Hamden Plains United Methodist Church, 15 Church St., Hamden, CT 06514, earmarked for the Book of Remembrance. Arrangements in care of BEECHER & BENNETT, 2300 WHITNEY AVENUE., HAMDEN.