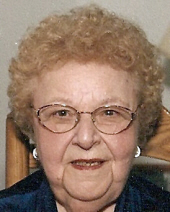 Gloria (Dioguardi) Cerreta, age 89, died Tuesday, January 5, 2010 after a brief illness. She was born on November 7, 1920 to Louis and Mary (Cianci) Dioguardi and was a life-long resident of Meriden. Gloria was a member of the First Baptist Church. Prior to joining that congregation, she was a member of the church her grandfather helped to found, the Italian Baptist Church, which later became the Grace Baptist Church. Gloria worked for many years for the Hull Printing Company and formed many friendships there. She is survived by her son, Patrick Cerreta Jr. and his wife Ann, her granddaughter and grandson-in-law, Stacey and Carlos Kuilan and her grandson, Patrick Cerreta III. She is also survived by her sister and in-laws, Joyce and Anthony Daniels, Lucy Dioguardi, Donna Dioguardi, John and Dorothy Cerreta, Patricia Cerreta and many loving nieces and nephews. She predeceased by her loving husband Patrick Cerreta Sr., her brothers Ranal, John, Louis Jr., Ernest, Ronald and Arthur Dioguardi and by her sister Norma Cabata. A memorial service will be held at the First Baptist Church, 450 Broad Street, Meriden, on Saturday, January 23, 2010 at 10a.m. led by Rev. Dr. Robert Prescott-Ezickson. Interment of her ashes will be at the convenience of the family. The family asks that in lieu of flowers, memorial contributions can be made in Gloria's memory to the First Baptist Church of Meriden. The Beecher-Bennett Funeral Home 48 Cook Ave., Meriden is assisting with arrangements.