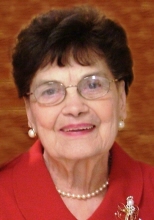 Gloria passed away peacefully on July 4, 2017 after a sudden illness. She was the wife of the late William John Elliott and the daughter of the late Minnie and Charles Held. She was predeceased by her brother Lawrence Held. She resided at Congregate Housing of Hamden. She attended New Haven schools, graduating from Hillhouse High School and receiving the Daughters of the American Revolution medal. She is survived by her daughters Billie-Jean Mallison of North Carolina, Kate Reeves (John Barnes) of Vermont, and Nancy Elliott (Darrow Loucks) of Hamden, and a special grandson, William F. M. Mallison of Washington, D.C. She is also survived by her sister-in-law Jean Hanley of Hamden and several nieces and nephews. She was blessed with the deep friendships of Helen Shea of Hamden and Rhoda Pahl of Cheshire. Gloria traveled with her husband while he served in the U.S. Army Air Forces during World War II, and lived in Texas, Missouri, and Kansas. She enjoyed traveling, reading, writing, sewing, knitting, and decorating. She worked in early education, including a program for special needs children at Helen Street School in Hamden. Gloria was loved and cared for by her family, to whom she was totally devoted. Friends are invited to visit with Gloria’s family on Sunday, July 9 from 4:00-6:00 PM at BEECHER & BENNETT FUNERAL HOME, 2300 Whitney Ave., Hamden. Burial will be private. In lieu of flowers, donations may be made to Friends of the New Haven Animal Shelter, 81 Fournier St., New Haven, CT 06511.