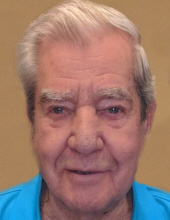 Gordon Ives, 90, of Meriden, loving husband of 62 years to the late Jean Natyzon Ives, passed away on September 30, 2019 at Apple Rehab-Cocomo in Meriden. He was born on February 14, 1929, a son of the late Harold and Mildred Shaw Ives. After graduating from Boardman Trade School in New Haven, Gordon honorably served in the U.S. Army until 1952. He then went on to work as a mechanic for many years until he became the owner and operator of Uptown Garage in Meriden until retirement. In his free time he was a member of the Elks Club # 35, Masonic Meridian Lodge #77, North Italian Home Club, and the U.S. Power Squadron. He also enjoyed boating, snowmobiling, golfing, bowling and playing cards. Gordon is survived by his children; Debra and Samuel McMaster of S.C., Sandra and Brian Howard of Naugatuck, Susan and Michael Suravich of Killingworth and Gordon 'Butch' Ives of Middletown. He also leaves his half siblings Pamela and Bernard Ferrara, Jeanie Ives, grandchildren; Lisa, Aaron and Brian Howard, Sharon and Michael Gaynor, Pamela, Gordon 'Charlie', and Amanda Ives, Keith and Linda Suravich, great-grandchildren; Kevin and Nicolas Hnatiuk, Paige and Tanner Gaynor, Grant and Vivienne Woodward, and Zylah Rose Ives. A service celebrating Gordon's life will be held on Saturday October 5 at 12 pm in the Beecher & Bennett-Flatow Funeral Home, Meriden. Friends may visit with his family from 10am-12pm. Interment with Military Honors will follow in Walnut Grove Cemetery. In lieu of flowers, donations in his name may be made to The American Heart Association P.O. Box 417005 Boston, MA 02241, or by going to www.heart.org.